Austin Tindle
Masahiro Setgawa has the lead role in Hijome my hero.

When he was younger, Masahiro had orange hair and usually wore a white button shirt with a small chain necklace.

Currently, he is seen mostly in his high school uniform. He has blonde hair longer on top in proportion to the sides and small, green eyes. He maintains a chain necklace on his neck and has piercings on his ears.

Later in the book, he wears a chain with a ring attached to it as a necklace.

Previously described as a 'helpless delinquent', Masahiro is a reserved and realistic person who often degrades himself and apologizes for anything he may have done to upset others, but there are also times where he stands up for himself. One example is if someone insults the one he loves.

He has a strained relationship with Megumi Setagawa (Masahiro's mother) as he disagrees with her sexual profession, which caused him to have to learn how to be independent. At an early age, he was able to cook and clean very well.

As the series goes continues, he is able to act more confident, and he even displays his dominant side.

Not much is known for sure about Masahiro's history, but it is implied that his father either left the family or he died for unknown causes when Masahiro was young. He disliked Hero themed shows as a kid, finding them unrealistic. His mother seems to be some sort of host or possibly a prostitute. It is made apparent that this makes Masahiro uncomfortable, so much that Masahiro does not go to his own home if she has 'clients'.

In the anime, which is about the first two volumes of the manga. Masahiro is depicted as a helpless delinquent who runs errands for a small gang of thugs, as he has no one else to go to for help. However, one night he finds a helpless kitten (Sasa) along with his soon-to-be best friend Kensuke Ohshiba. Unkown to Masahiro at the time, his best friend's brother is The Bear Killer who has been taking down the local gangs. Upon going to Kensuke's home to take care of the kitten, Kousuke Ohshiba, or The Bear Killer returns home and meets Masahiro. Masahiro comes to respect the Bear Killer, being given extra assistance from the teacher, and then asking Kousuke if he can be his underling, which entailed cooking, cleaning, and more. Kousuke travels away from home, and returns on Masahiro's first day of high school as the substitute math teacher allowing the two to reunite at a playground while he is being chased by the gang of thugs he was previously affiliated with. Masahiro is eventually asked to retrieve Kousuke a pack of cigarettes where the man realizes teens can't buy cigarettes and follows after him. At this time, he tells Masahiro that he looks at Kousuke with an expression of lust. Freaking out over this, he dwells on if he actually likes Kousuke. However, at this time, Toru's gang finds him again, and he is forced to hanging out with them again. To stop Kousuke from finding out, he starts to avoid his friends and Kousuke. Kousuke eventually shows up at Masahiro's apartment to see what is wrong, when Toru's gang shows up shortly after, and a fight ensues due to his status as The Bear Killer. The fight ends with Masahiro being hurt by Yabase, him leaving the gang officially, and confessing his love to Kousuke. Even with this conflict over, Masahiro and Kousuke begin dating which adds building stress for Masahiro, who is afraid of getting Kousuke in trouble because the man is his teacher. When the stress becomes too much, he ends up breaking up with the man. However, Kousuke drops off a letter at Masahiro's apartment, which tells him to meet up with him on Christmas Night up at the lookout, as there is a meteor shower that night. Masahiro gets home late, and only then receives the letter. After realizing that he cannot live with Kousuke by his side, he runs up the mountain to the lookout to find the other man, and they reconcile with each other. Kousuke presents Masahiro with a pair of rings, and they become officially engaged.

Masahiro and Kousuke first meet when Kensuke brought Masahiro home. At first, Kousuke thinks Masahiro looks like a thug but he believes he can help Masahiro. Soon after, Masahiro becomes Kousuke’s underling. Masahiro looked up to Kousuke because Kousuke would help Masahiro and Kousuke was like a hero to Masahiro. Kousuke eventually goes to become a teacher and when he returns Masahiro is a high school student. From then on, Masahiro's relationship with Kousuke changes. Kousuke is unable to understand his own feelings and is scared that Masahiro won't recognize Kousuke's feelings so he pushes Masahiro away.

Masahiro gets back into trouble with Tooru's gang. Masahiro distances himself from his friends and Kousuke. Masahiro doesn't tell Kousuke about the gang because of Masahiro's rejection and he doesn't want Kousuke to worry. Kousuke goes to Masahiro's house and Kousuke learns Masahiro is in trouble. Kousuke also tells Masahiro his true feelings. Tooru's gang comes to Masahiro's house then once the gang sees Kousuke they challenge Kousuke to fight them. Kousuke is fighting the gang when Yabase tries to stab Kousuke. Masahiro sees this and rushes to Kousuke's side. In result of this, Masahiro jumps in front of Kousuke and Masahiro gets stabbed. Kousuke gets mad that Masahiro got stabbed but Masahiro says he didn't want Kousuke to get hurt. After Toru and his gang members leave, Masahiro embraces Kousuke and breaks down in tears telling him that he wants to be with him. Shortly after these events, they begin their romantic relationship. With Kousuke making Masahiro his 'secret wife'. They face many obstacles, such as Masahiro attempting to take initiative and kiss Kousuke, trying not to show their affection in public, and Masahiro and Kensuke's friends finding out about their secret relationship. But the most noticeable problem for them is their relationship getting discovered by people due to their status as teacher and student. As Masahiro fears about Kousuke getting in trouble and losing his job, Kousuke explains to him that although he doesn't want to quit his job, Masahiro is the most important thing in his life and doesn't want to lose him. Masahiro continues to panic about Kousuke's job and after asking people what he should do about thier relationship, Kousuke is being pressured by his friend to leave Masahiro alone more than he does. This makes Masahiro worry more and after he rushes home to see if Kousuke is ok after he finds out he’s been to the hospital, Kousuke precedes to break up with Masahiro which results in Masahiro showing his own feelings to Kousuke. Kousuke then gives up on the idea of breaking up and they try to forget they ever tried to break up. Kousuke tells Masahiro that he can't let him go and that he is too special to him. Christmas comes and Kousuke asks Masahiro to come shopping with him, and once they are out of sight of the house Kousuke gives Masahiro a mysterious letter, with something in. Masahiro suspects it was a love letter given to Kouske by someone else, however once he opens the letter he finds a ring inside with Kousuke proposing that they stay together forever! “It’s a good day to give you this” Kousuke tells Masahiro (because in Japan on Christmas Day it’s known to be a romantic day) Sadly though, the ring doesn’t fit. Masahiro now wears it around his neck on a chain. This is the end of volume 2! :)

At first, Hasekura teases and doesn't like Masahiro because he is very close with Kensuke. Hasekura realizes Masahiro likes Kousuke and pushes Kousuke to go to Masahiro. He also supports Kousuke's and Masahiro's relationship, he defends Masahiro when Mitsuru Fukushige calls Masahiro and Kousuke's relationship disgusting.

Shige and Masahiro are good friends. Shige thinks Masahiro is cool, funny, a good cook and he knows Masahiro is a kind person. Until the class president tells him, he doesn't know about Kousuke and Masahiro's relationship. Out of shock, Shige calls their relationship disgusting, the group turns on Shige. Kensuke gets very angry and kicks Shige out. After this incident, Masahiro tries talking to Shige and he is ignored. After Kousuke gives Masahiro advice, Masahiro makes Shige listen to what he has to say. Masahiro says that Shige should not call Kousuke and Masahiro's relationship disgusting. He questions Shige on why he is okay with Kensuke and Asaya's relationship but not his. Masahiro admits he loves Kousuke. Shige says he couldn't believe that he was dating someone really old and that he said it out of shock. Shige says he wants Masahiro to trust him because he can. Masahiro and Shige's relationship strengths after this.

Megumi is Masahiro's mother, their relationship is not very good due to Megumi's job. Megumi often brings customers home and she trashes the house. Masahiro often cannot go home because of her clients. Megumi made Masahiro feel neglected and alone, this causes Masahiro to join Tooru's gang. Masahiro only joins Tooru's gang because he wants to belong to something. Megumi tells Masahiro she knows that having relationship with others is probably hard for Masahiro because she is never around and Masahiro's dad isn't present.

"This guy... This guy's not a god of perfect destruction, nor is he a perfect, flawless, hero. He just happens to be a guy who was born a little before me. A guy I'm in love with."
—Masahiro's thoughts as he kisses Kousuke Hitorijime My Hero (anime), Episode 12

"Sitting here whining about it isn't going to change anything!"
—Masahiro

"You act like you're indecisive, but you're just running away."
—Masahiro

"Having someone you care about that much isn't a problem. Though I'm sure it comes with it's problems."
—Masahiro

"I kind of envy you, in a way, for having a friend you care so much about."
—Masahiro

"If anyone knows the answer, I'd love to know, why is it that humans get so hung up that they want to run away and forget about everything?"
—Masahiro 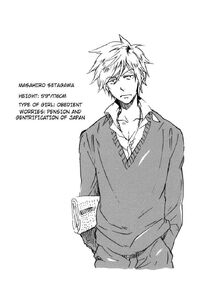 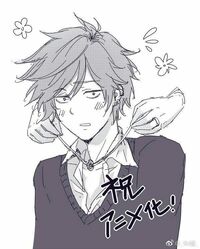 Ring with Necklace
Add a photo to this gallery 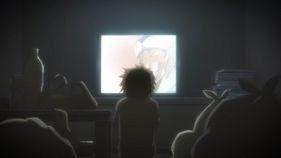 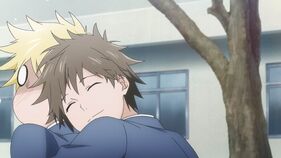 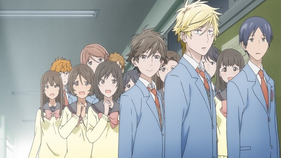 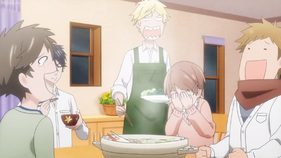 Masahiro cooking for his friends 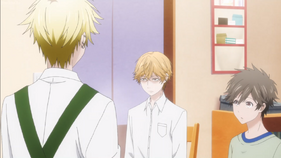 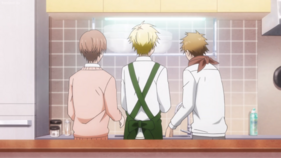 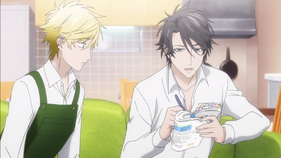 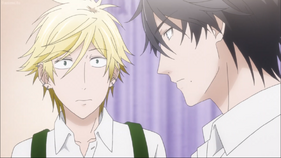 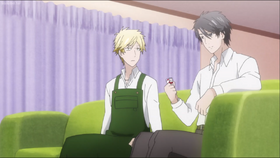 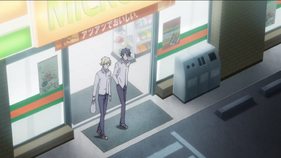 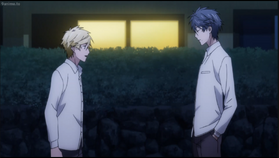 Masahiro being told that him and Kousuke can't have a relationship 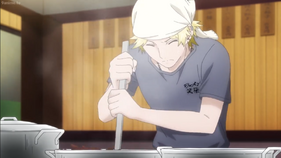 Masahiro cooking and trying not to think about Kousuke 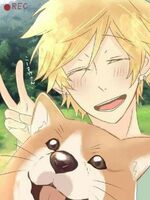 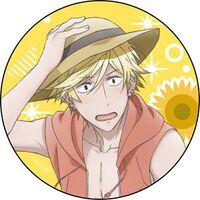 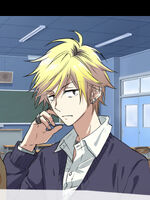 Masahiro from the visual novel
Add a photo to this gallery

Retrieved from "https://hitorijime-my-hero.fandom.com/wiki/Masahiro_Setagawa?oldid=2064"
Community content is available under CC-BY-SA unless otherwise noted.